Probiotics – All You Need To Know

A common question about probiotics is whether it is ok to take probiotic supplements every day. Whilst there may be a few exceptions to this rule, the general answer is yes, it’s safe, and usually recommended, to take them daily. It’s important to understand that probiotics are a natural supplement and not a medicine.

Probiotics are most effective when they have been taken on an empty stomach to make sure the good bacteria makes it to the gut as quickly as possible. The best time to take a probiotic is either first thing in the morning before eating breakfast or before going to sleep at night.
A general recommendation is to choose probiotic products with at least 1 billion colony forming units and containing the genus Lactobacillus, Bifidobacterium or Saccharomyces boulardii, some of the most researched probiotics.
Your gut contains millions of bacteria. These bacteria play an important role in keeping you healthy. An imbalance of bacteria in the gut can happen when more ‘bad’ bacteria is present in your gut than ‘good’ bacteria.

This may occur after taking a course of antibiotics, in times of stress or if you have problems such as Irritable Bowel Syndrome (IBS), a stomach bug or inflammation of the bowel such as ulcerative colitis.

Probiotics are food supplements which contain ‘good’ or ‘friendly’ bacteria. When taken in adequate amounts it is thought that they can improve the balance of the bacteria in the gut.

Probiotics are added to some foods or can be taken as dietary supplements in the form of capsules, tablets and powders.

The most common probiotics that are thought to benefit some people with IBS come from two strains of bacteria:

What is the difference between a probiotic and a prebiotic?

Prebiotics are different to probiotics. Prebiotics are food ingredients which are not digested and affect the gut by encouraging the growth and/or activity of ‘good’ bacteria in the gut. They are food for this type of bacteria, which encourages them to grow.

Prebiotics can be purchased in supplement form but are also present in foods such as onions, garlic and asparagus, although they may exacerbate IBS symptoms in some people. 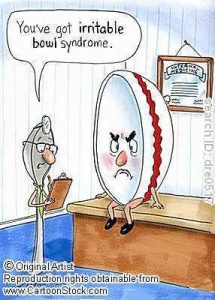 Some products contain a combination of prebiotics and probiotics. These are known as synbiotics.

It is also thought that probiotics can help our immune system to work better. Probiotics are thought to be helpful in managing IBS symptoms such as pain, bloating and altered bowel habits, especially diarrhoea. There is some evidence about the benefits of different probiotics in IBS but there is further work to be done.Probiotics appear to be safe for most people. However, people who have a condition where their immune system is affected, such as cancer, HIV or transplant patients, should not take probiotics until they have discussed this with their doctor.

Some probiotics can cause wind or bloating when you start to take them. This should disappear after a few days or you may need to reduce the dose until these symptoms have settled.

Although there is not enough evidence available yet to make specific recommendations about specific probiotics to use for different symptoms, there are many different probiotics available and it can be difficult to decide which to try.

Probiotics and their effect on health, including IBS, is an active area of research. To date, it is thought that for overall symptom improvement, flatulence/wind and pain, a multi-strain product may be helpful.

If constipation is a problem, a product containing bifidobacterium lactis may help.

If following the low FODMAP diet bifidobacterium is probably helpful.

A minimum four week trial is recommended as it can take some time to see the benefits. You should also monitor the effect of your symptoms to find out if it is helping. It may be useful for you to keep a ‘food and symptom diary’ to help you to do this. Currently it is advised that if after this time there is no improvement, you can consider using a different brand or strain of bacteria as the type of bacteria used varies between products and may have different effects on symptoms.