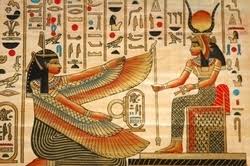 From ancient pharaohs to the kings of France,

Ah, the enema. Shooting warm liquid into the rectum through the anus as a quick fix for what ails you has a history as long as the human colon itself. Like bleeding and cupping, the enema has been touted as a cure-all ever since doctors were penning their prescriptions on papyrus. Used by folk-healers and physicians alike, this particular form of therapy reached an art form in pre-revolutionary France, where more people probably had daily enemas than brushed their teeth.

The first mention of the enema in medical literature comes from Ancient Egypt. No surprise there. What is unusual, however, is that the enema was considered such an essential component of good health that every pharaoh had his own so-called “Guardian of the Anus.” Both the Edwin Smith Papyrus (c.1600 BC) and the Ebers Papyrus (c. 1550 BC) — two of the earliest known medical documents — mention enemas in detail. Ancient Greek writings corroborate the Egyptian preoccupation with colonic cleanliness. In 500 BC, Hippocrates and his followers began to advocate health by enema as well, as did the eternally popular Galen, some 650 years later.

Back in ancient times, enemas were believed to cure a wide range of physical ailments and not just those related to digestion and excretion. Headaches, sexual dysfunction, allergies, asthma, childbirth, fevers, even the common cold — all were supposedly helped by a good rectal purging. The enema’s powers were so revered that the procedure itself bordered on the sacred. As such, it was an essential part of many religious rituals in Egypt and elsewhere.

The cleansing ritual became a critical part of many spiritual ceremonies across an astounding variety of cultures. The people of ancient Babylonia, India, China and Africa all believed in cleansing. Actually, the common delivery systems back then differed greatly from the comfortable and flexible rubber tubing and bulbs of today. The most common enema devices consisted of hollowed-out animal bones attached to liquid-filled gourds or animal bladders. Sometimes, instead of just letting the time-tested scientific principle of gravity do its work, designated blowers were recruited to help the process along.